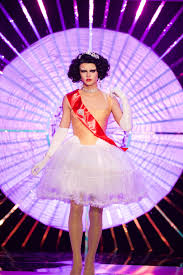 Gothy Kendoll, 22, (formally known as Sam Handley off stage) was a cast member on the first ever UK season of the Emmy award winning show ‘RuPaul’s Drag Race’, which was after nominated for a National Television Award after its first season.

Gothy is a stand out member of the cast, not only for her contemporary yet glamorous aesthetic but also the fact that she isn’t a performance queen. Instead, Gothy prefers to DJ and hosts a variety of parties across Europe and the USA. Gothy has also participated in Drag Cons internationally, further reinforcing her fanbase. She has been working as a drag queen since 2017 and was voted as one of the best drag acts in Leeds within 2 months of working on the scene.

Gothy has a degree in Fashion communication after studying at Leeds College of Art. Her flare for drag started here, she even completed a dissertation on the “the art and metamorphosis” of drag. Gothy is now doing various tours all over the UK including ‘Comedy Queens’ and ‘Drag Race Domination’, as well as European tours and more trips to America.